NIGERIA TRADITIONAL WAY OF SAYING “I DO”

Every Nigerian have tradition that portrays his/her identity,before a woman is traditional accepted as being married,the man have to do the traditional rites and these ceremonies have to be performed with traditional clothing.In my first introduction about things you need to know about Nigeria (you can check that up on my page) there I talked about different ethnic groups their cultures,food and clothing.

Now I want to give you insight of how interesting these traditional rites could be. Frist of all every Nigerian man pays to marry a Nigerian woman,the amount ranges per state or custom.I will be showing pictures of how it is done according to region.

When you are marrying from a Yoruba region,the families of the men usually prostrates by lying down to the family of the woman.(it’s a form of greeting and respect) 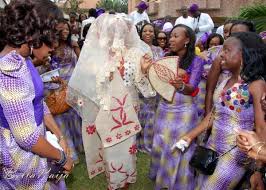 The listed items as part of her bride price to be presented to the woman’s family.

Even if you are not a citizen of Nigeria and you want to marry a woman with real traditional background you will also have to follow these rites,many have done so and they love it.

Unlike the Yoruba region that the men have to lie on the floor to greet, Ibo region are very liberal when it comes to traditional rites performance.

On the day of the traditional wedding,the man’s family must present all the items listed for the bride price(money inclusive),sometimes it’s a lot of food and clothing items.My hubby almost gave up after seeing his own list. 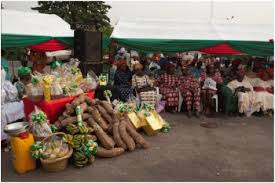 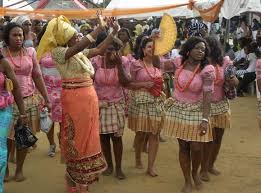 The woman is given a cup of palm wine to search for her husband to be in the crowd,whoever she gives the drink,is her husband.

Although I have never been to a traditional wedding ceremony in the Hausa region,and since majority of them are Muslims they follow the Islamic rites in the wedding.From my knowledge most friends I have seen from that region said the bride usually decorates her hands and leg.

Apart from these main regions of Nigeria,there are other States with their own traditions and rites.I will be writing about that in my next write-up so stick on and I will like to know yours if you have tradition of your Country.

One thought on “NIGERIA TRADITIONAL WAY OF SAYING “I DO””